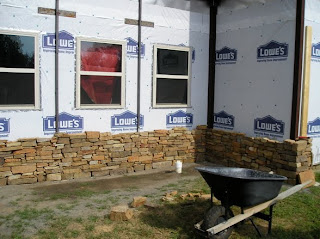 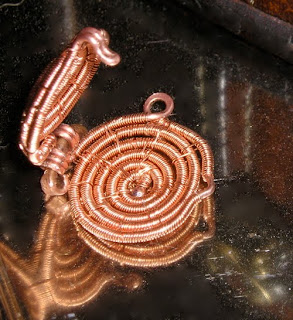 I have completed my first locket, thanks in large part to the inspiration Mary provided me (see my last post) I'm quite happy with it for it being a first and have a number of variations of it floating in my head :)

Art with Heart Beads n Blessings Cycle 3 is now taking pre-orders. This cycle's charity is Step Up for Cancer. I lost my Dad 23 years ago to Cancer, lost my Grandpa (Mom's Dad) a week after 9/11, lost my Aunt (Dad's Sister) in May. My younger cousin is battling her third round, I can't think of a better cause, I'm all in! I've made my order and have my design worked out, as much as I can without knowing what the surprise element will be! I am really looking forward to this cycle!

I've got a fairly decent routine going now. Rocks, box, or garden is my morning routine mantra. Stack some rocks, unpack or repack a box, or weed the garden. The rock work is really coming along now, my house is staring to look like a home, and the weeds .... are still overwhelming (it's a brand new rather large bed)- but give it some time.

I've also discovered another blog to follow, she's just moved to her own domain http://www.newdressaday.com and I gotta say, I read all the way back to her very first posting and I am really impressed with this young lady's creativity, she's really quite an inspiration. On just one dollar a day, she is creating a new outfit to wear each and every day for an entire year. What she can do to a MuuMuu is just amazing. The girl has definitely got an eye for style and color. Check her out and see if you don't agree!
Posted by WindDancerStudios at 6:51 PM No comments:

When did I get so busy!! 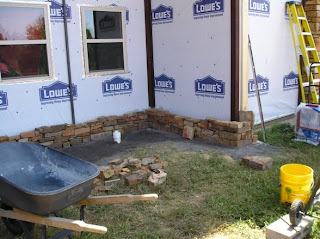 I just noticed I haven't posted in weeks, yikes! My excuse? I have been really busy of late. Really I have!

I've been putting tons - literally tons - of rock on the left half of my basement wall. It's stating to look really good too! Working with all that rock does tend to swell my fingers up some though, and the super high heat we had left me with a nasty heat rash on my rib cage. This pic was taken several courses of rock ago - I'm just below the Lowe's logo now.

Having an outdoor wedding to attend I took a couple days off and made myself a very pretty Silver and Turquoise set.

Then..... where did the time go??? it was time to get my kids ready for back to school! We went back to school supply and clothes shopping. Since my middle child is driving, she and my son were able to get their schedules and pick up those last little things they needed.

I looked around the house and boy did it look neglected! I spent another week cleaning and rearranging furniture. Digging through boxes and unpacking and just doing my best to try to make my house look more like a home. It's looking more so all the time. Still a few more boxes to go through but I'm making headway.

Then on her way into school, the low fuel light came on in my daughter's car, so she pulled in to the gas station. Rather she tried to pull into the gas station, she was just pulling in when she got hit. I can not begin to tell you how truly thankful I am that bruises, cuts and minor burns are all my children received. I AM truly thankful he took the nose of her car and did not t-bone them. The insurance declared it her fault as she was crossing traffic - but it didn't take a whole lot of looking at the facts to realize it wasn't entirely her fault. This being accident number 6 for the other driver - one of those was a few months ago, in January, for falling asleep at the wheel and he's only 21, is just one of those facts, but the one that bothers me the most. The rest are details and just putting 2 and 2 together and then finally hearing from the girl in the car driving behind Paige confirming it all. I am happy to say we found Paige another car, she drove it to school yesterday, but there are still a few repairs to be made yet before she is truly back on the road.

All of this in just a couple weeks! Feels like months. I did manage to remake several pairs of earrings, get pictures taken and listed too. I still have several pieces in my shops that need new photos, several pieces that still need listing AND I'm working on a design for a locket. I've had this design floating around since January of 2009 fiddling with the how to's of it. Finally, thanks to Mary Tucker of Wired Elements http://www.etsy.com/shop/wiredelements I've finally decided how I want to do it. It's a technique I've known for many years and she gave me a wonderful slap the forehead moment when she shared with me how she did it! Her blog is the Angsty Artist, http://theangstyartist.blogspot.com/ if you're so inclined.

I'll try not to let so much time pass between postings.....'til next time!
Posted by WindDancerStudios at 1:34 PM No comments: