You all did a wonderful job of crossing your fingers toes and eyes for me.... I won!
Rather I was one of the winners. I don't know what I won yet as the prizes still need to be divvied up, but the prize doesn't really matter. I get to jump up and down and do happy dances because I won!!

Sadly none of my picks won (other than my admiration). I obviously have no idea what the judges are looking for lol Although my last pick on my blog post didn't win, the maker did... for one of her other pieces, yay Elsie!

Kalmbach Publishing, Debbie Rasmussen of A little of this, a little of that. (this one was one of my favs, not sure why I didn't get it included in my picks hmm)

Best Use of Seed Beads

Both Fusion Beads and Nina Designs chose Debbie Rasmussen of a little of this, a little of that
(that's three wins with two pieces for Debbie -- way to go!)

Kalmbach Publishing, Cheryl McCloud of One Thing Leads to Another

Best Use of Color

Out of the Box

Chosen by Zack as his absolute favorite, Leslie Wayment of AA Beads & More Out of the Hat Winner

Pulled out of a hat of alllllll the entrants,
Mary Tanner (a Facebook entrant!)

Lori took all her absolute favorites(and that was TOUGH to narrow down)and then drew one out of a hat.

And last but not least,

Jennifer Cabic of What I Believe...

Danielle Kelley of Imbue the Muse

CONGRATS TO ALL THE WINNERS!! Congrats to everyone not on this list as well. You are one talented group of artisans!

We have a couple bills to pay first, but I finally get my new computer!!!!! I am so excited. Paige has been the absolute sweetest to share her laptop with me for the last EIGHT months I know there were times when she wished she didn't have to ahem finals, eight page term papers, research for those papers. She actually went to the University's library and used their computers so as not to split up where she had all her info. I need to do something REALLY special for her. Her birthday is coming up too so I need to get on it!

Thanks for stopping by! I'll post again when I know what I won :D
See ya next time!
Posted by WindDancerStudios at 9:42 AM 2 comments:

I mentioned earlier one of my very first on the desk postings included a UFO of an embroidered piece. A recent Art Jewelry Elements blog posting issued a challenge - FINISH A UFO! oooh game on!! So I choose that embroidered piece to finish. I had planned on it anyway so it was serendipitous timing lol

I've had this design in my head since the moment I saw the beads Kateri (and most awesome nephew) had offered up for the months drawing. But once I had the beads in my hands, they were soooo pretty, I was immediately intimidated. I had to do them justice, but could I? Then I won the beads from John (I was on a roll) , the gold stone daggers were perfect for the design :) but I was still not quite there. So I bought some turquoise and some bronze delicas ......I was almost there I could feel it.
I've been playing with stamped filigree lately and it hit me as I was cleaning off my desk THAT was the missing ingredient to the design in my minds eye. And Finally it all came together. 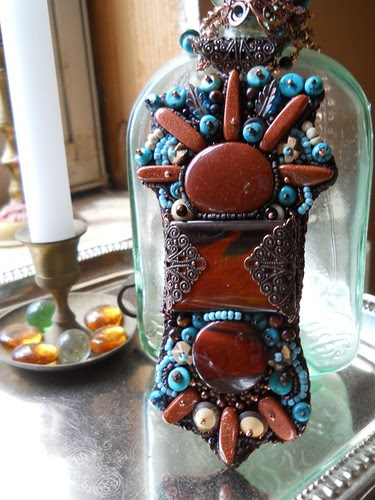 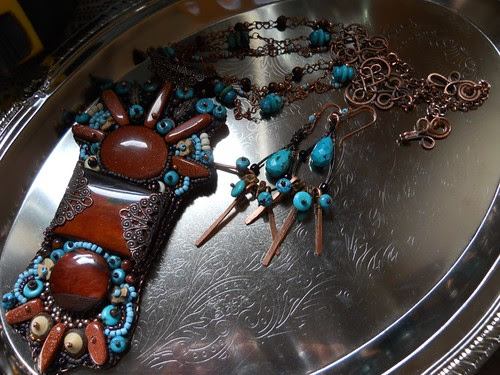 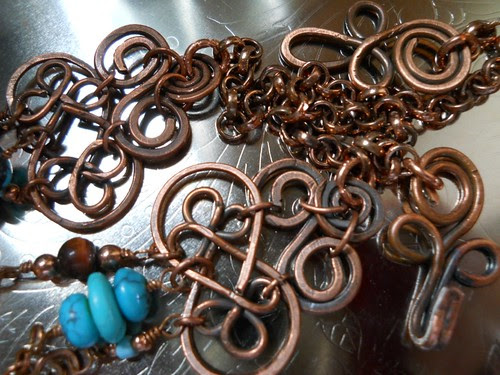 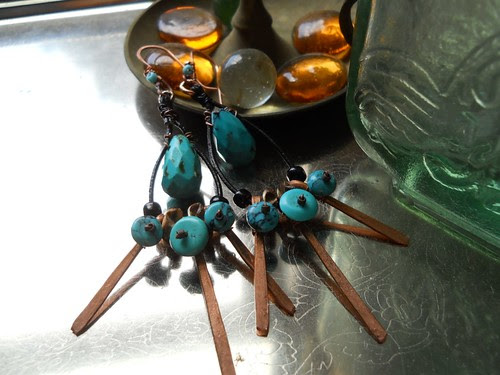 I'll be wearing them tonight (Friday night) at my son's graduation. I'm prescheduling this post so I don't forget :) Busy couple of days coming up!! I'm so very proud of him, that sweet little boy who hid behind my legs has grown to become such a fine young man.

I'm going before I make myself cry :) Thanks so much for stopping by and visiting...
We'll see you next time!

Posted by WindDancerStudios at 8:00 AM 8 comments:

Since Lori added the contest feature to the blog party, and since the winners "should" be announced by the time this posts (Yes I prescheduled this one lol). I thought it might be fun to compare my favorites to the judges favorites. There were several other pieces I loved, but they didn't seem to make it into the contest portion.

In no particular order .... Here are my picks:

http://pinterest.com/pin/96827460710926780
Pinterest apparently doesn't allow embedding pics anymore {phooey!} It was so easy to pin and keep all the info with the pic. The above pin is the floral goodness of Kumi of Malie Kai Designs - her blog:
http://maliekaidesigns.blogspot.com/2013/03/bead-soup-7-reveal.html

I obviously have a very romantique style lol Lots of hearts and flowers in this group! But, hang on! There is one more favorite.........

There you have it! Can't wait to see the judges picks, cross your fingers, eyes, toes, etc one of MINE also makes their list :D

Thanks for stopping by and having a little fun with me!
See ya next time!
Posted by WindDancerStudios at 8:16 AM 2 comments:

Blast from the Past

I'll have to come back and edit this post to add a pic later. Last day of finals so another short post from me again today.

Currently on the Desk:
*Forged hoops - oops! I misdrilled the hole on one earring for the latch so I need to recut the ends, forge, file, and drill again.
*Ribbon choker and simple pendant awaiting a rolled hem to finish. Probably won't take five minutes if I just pick up the needle lol
*A beadwoven necklace with a gorgeous lampworked focal first couple of inches have been started and it is going to be a pretty one! Day to day life has slowed me down on this one, these tiny beads need a clear head and I have had a head ache for several days now, hoping the cause goes away and soon!
*A bead embroidered set - gorgeous gorgeous colors in these stones! Beads are laid out and waiting for that first stitch! Seems like I've been planning this one for ages, but it's more about me trying to live up to the beauty of these stones and do them justice. I want all the details to be just right - I'm starting to think I may just have to dive in........

Remember this post from way back in 2011. It's when I created the first On The Desk post. I've finished all those projects (yay me!) except two. The one in the photo shown in the original post - it's still sitting on the bead tray, and the bead embroidery piece. This last weeks cleaning spurt prompted a let's get a UFO (UnFinished Object) done mood and six and a half hours later the bead embroidery piece is looking pretty darn good. I'm going to work up some chain while I decide whether it needs any more beading added to it before I begin cutting away the extra backing. I am very happy with it so far.

I never told the kiddo what my inspiration was for this piece, but my Art Major daughter nailed it! I asked how she liked it and what she thought of it. The kiddo immediately rambled off the exact inspiration I had used and the feel I was going for with the piece. It brought a tear to my eye, so happy I was able to convey what I wanted and so proud of her for being able to define the period and styles so easily.

With things getting cleaned up and UFO's getting finished up it feels like May is on the verge of being a very productive month around here! Maybe I'll even tackle finishing up the laundry room and the weight room {grin}

Thanks for stoppin' by!
We'll see you next time!
Posted by WindDancerStudios at 9:27 AM No comments: