Welcome to Bead Soup Blog Party number 8. The reveal date has finally rolled around and I am excited to show you all that I have made. This is my fourth time participating in the party and I have found it every bit as inspiring as the first, second and third times. This year my partner is Dana James, I wrote a quick blog post introducing her to you here. 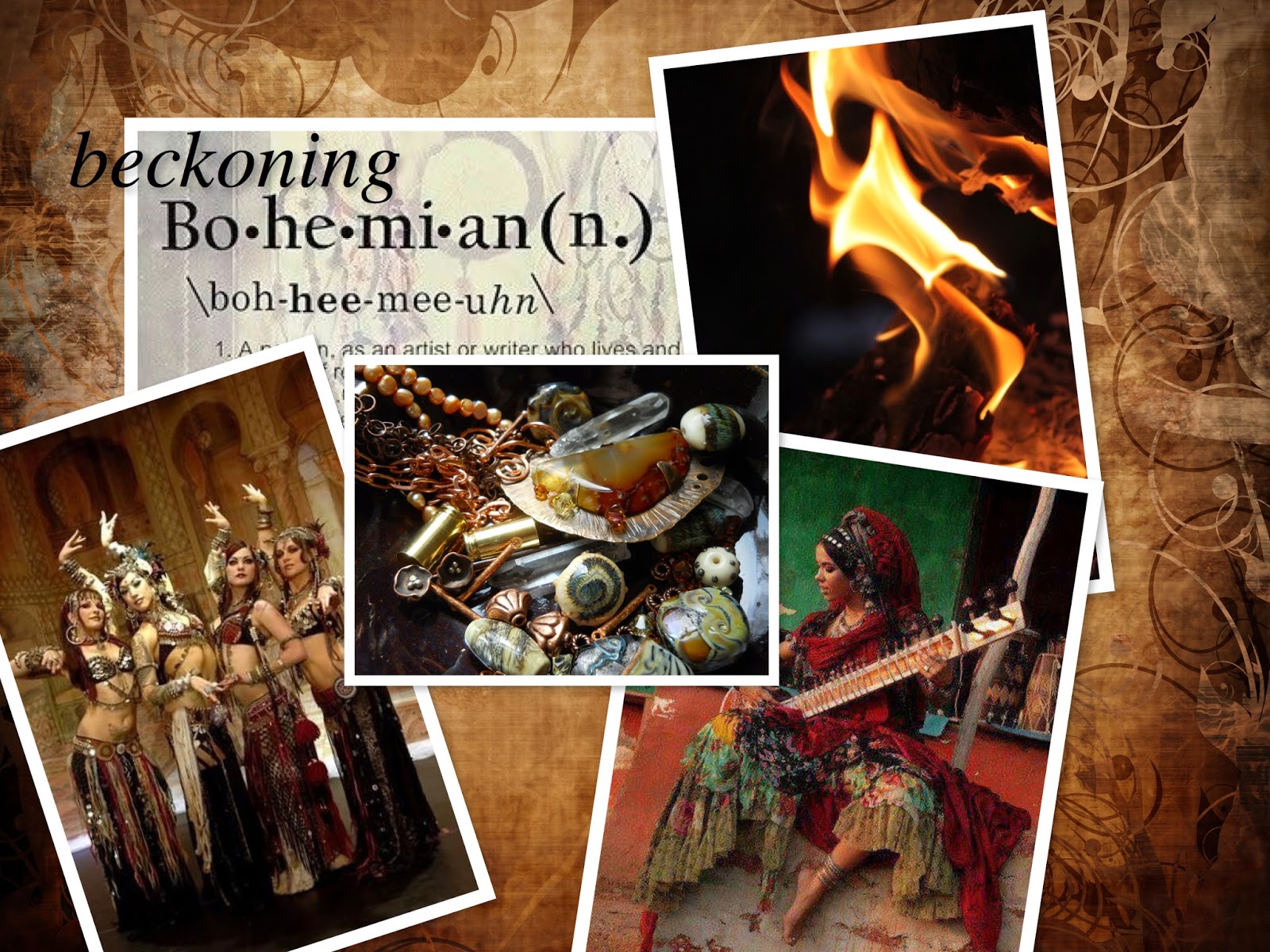 She sent these wonderful soup ingredients that just called Bohemian to me, and when I say called I don’t mean whispered. My muse was very clear this was the direction we were taking, and then she went into creative overdrive…………

Together we made armloads of bracelets. 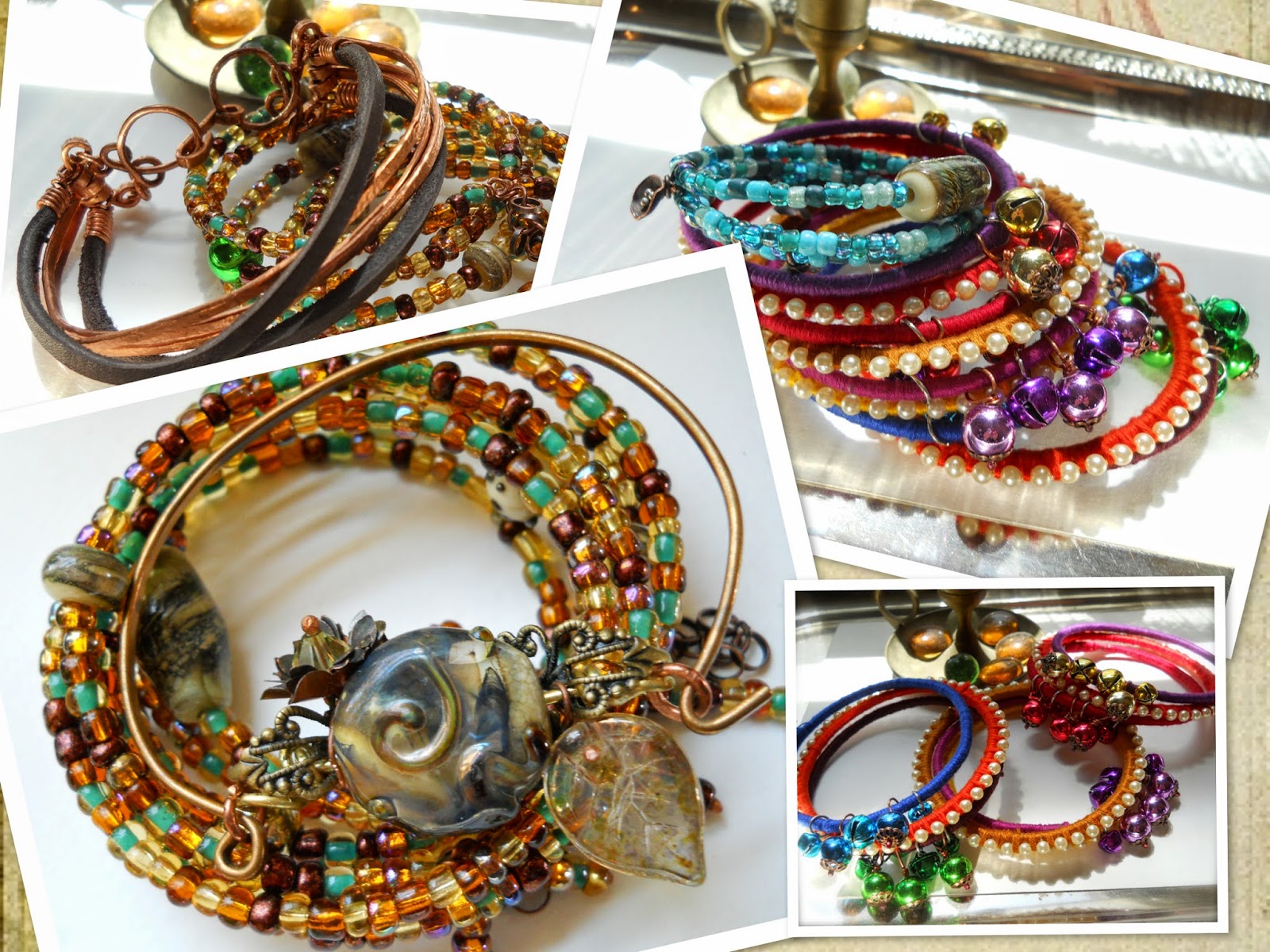 I had never played with memory wire, can you believe it? The stuff has been around for nearly as long as I have been playing with beads and I have never even touched the stuff. Not even once. I had in my mind’s eye stackers. armloads of pretty. I started with the teals, inspired by those gorgeous blues in the lampworked beads. Added those sweet sweet floral head pins and Hey, as long as we’re making stackers, let’s play! I grabbed up many feet of aluminum electrical ground wire riveting the ends together and wrapping the resulting o’s with yards of colorful threads and pearls, adding beads and bells for loads of super lightweight, super colorful, super happy bangles. Super right? We were going to town making these fun little things and it dawned on me, I hadn’t touched a single soup bead since bracelet number one - gasp! Never fear my dear, these are meant for stacking together!!
Returning to the memory wire this time I worked in earth tones picking up the subtler colors in those gorgeous lamp worked beads.

Ready to get in some metal work I made up some textured copper strips and wrapped up some leather fully intending to use one of the clasps Dana had sent. But when I was ready for it, the clasp just didn’t seem to work, sigh. Not one to argue with my muse I finished the clasp using a piece of the leftover copper and textured it so that it matched beautifully.

I remembered I had this great little bracelet wire from the Bead n Button design challenge that I hadn’t gotten around to using and what better way to showcase one of those lamps than that? I added a stamped filigree, a little flower with crystal center, and a Czech picasso leaf. Just sweet! 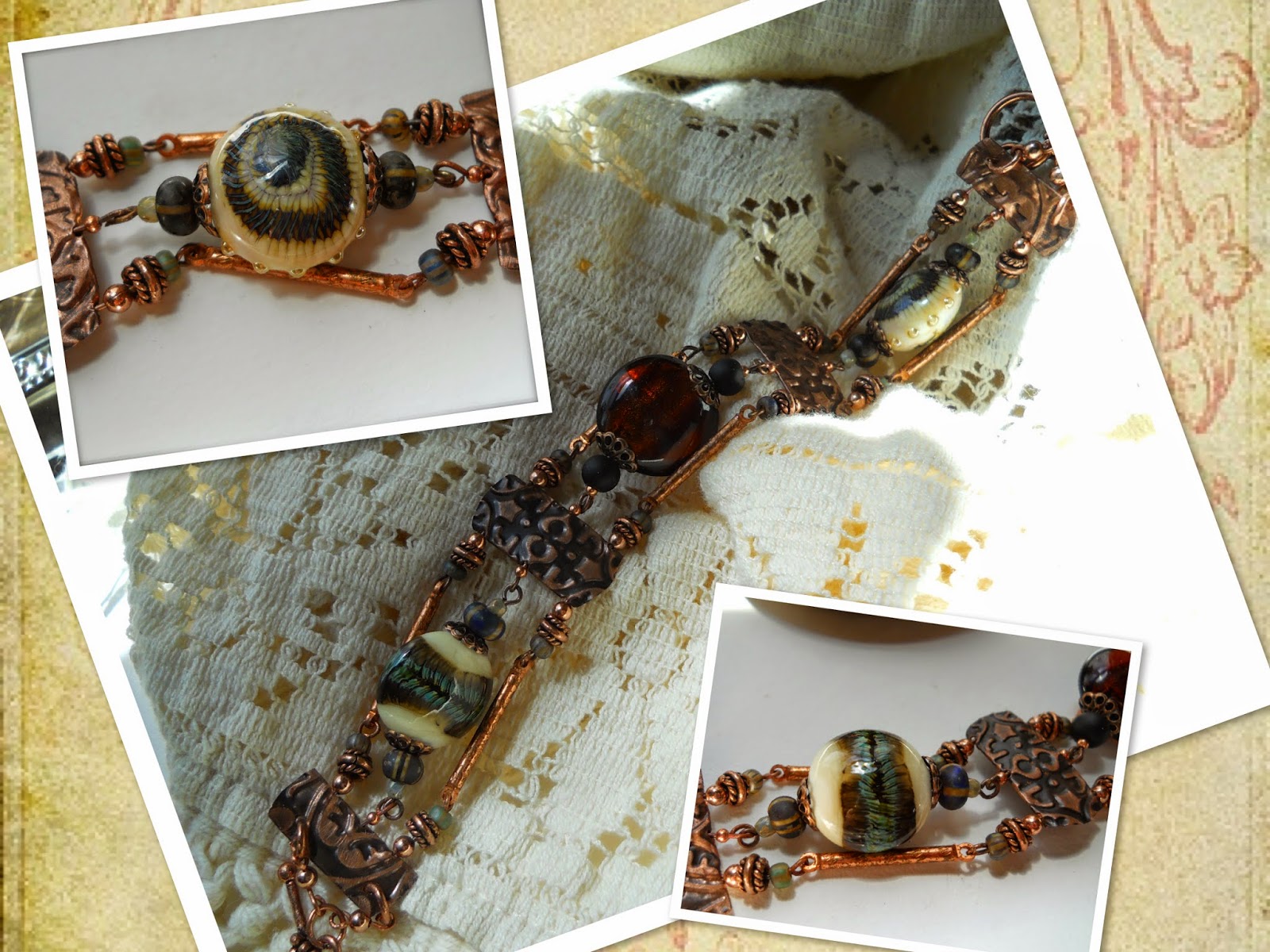 Then I made some connectors and played with those cool little copper bars and beads Dana sent. They looked really good with the larger lampworked beads and bracelet number 14 was born. This time I did use one of the clasps Dana sent :)

I had sketched up a design for the focal and ordered the bits I needed from B’Sues. I finished out the detailing while waiting in the lobby at the Drs office while the hubs was getting his eyes dilated. I had planned on etching the mehndi style designs but all I managed to do was discolor the metal ;/ hmmm 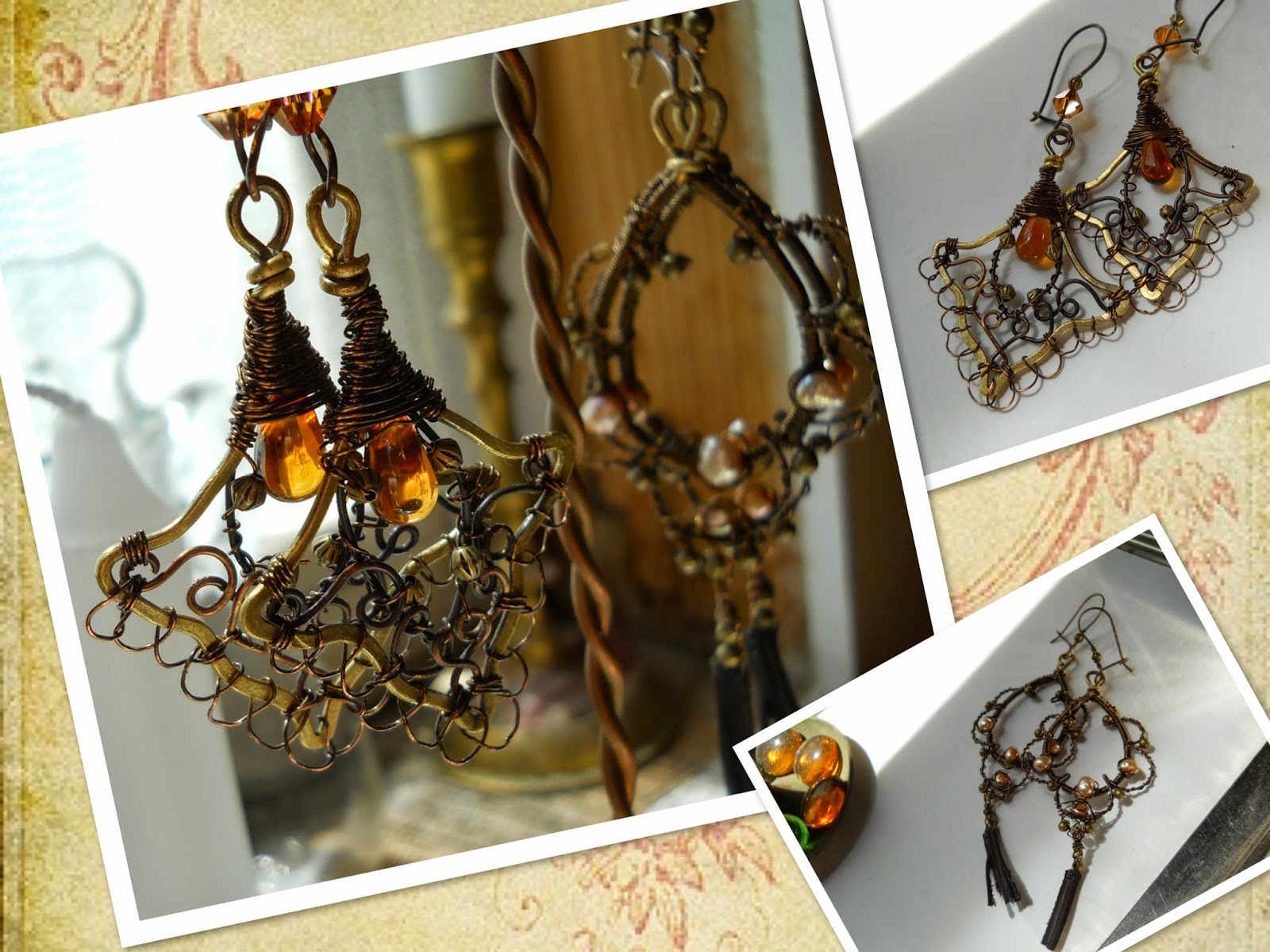 While I contemplated discolored metal I formed and forged some frames then wrapped up a couple pair of earrings. I LOVE these earrings. The first pair have Cognac hydro quartz and matching crystals from the soup stash and the second feature those sweet peach pearls Dana sent. 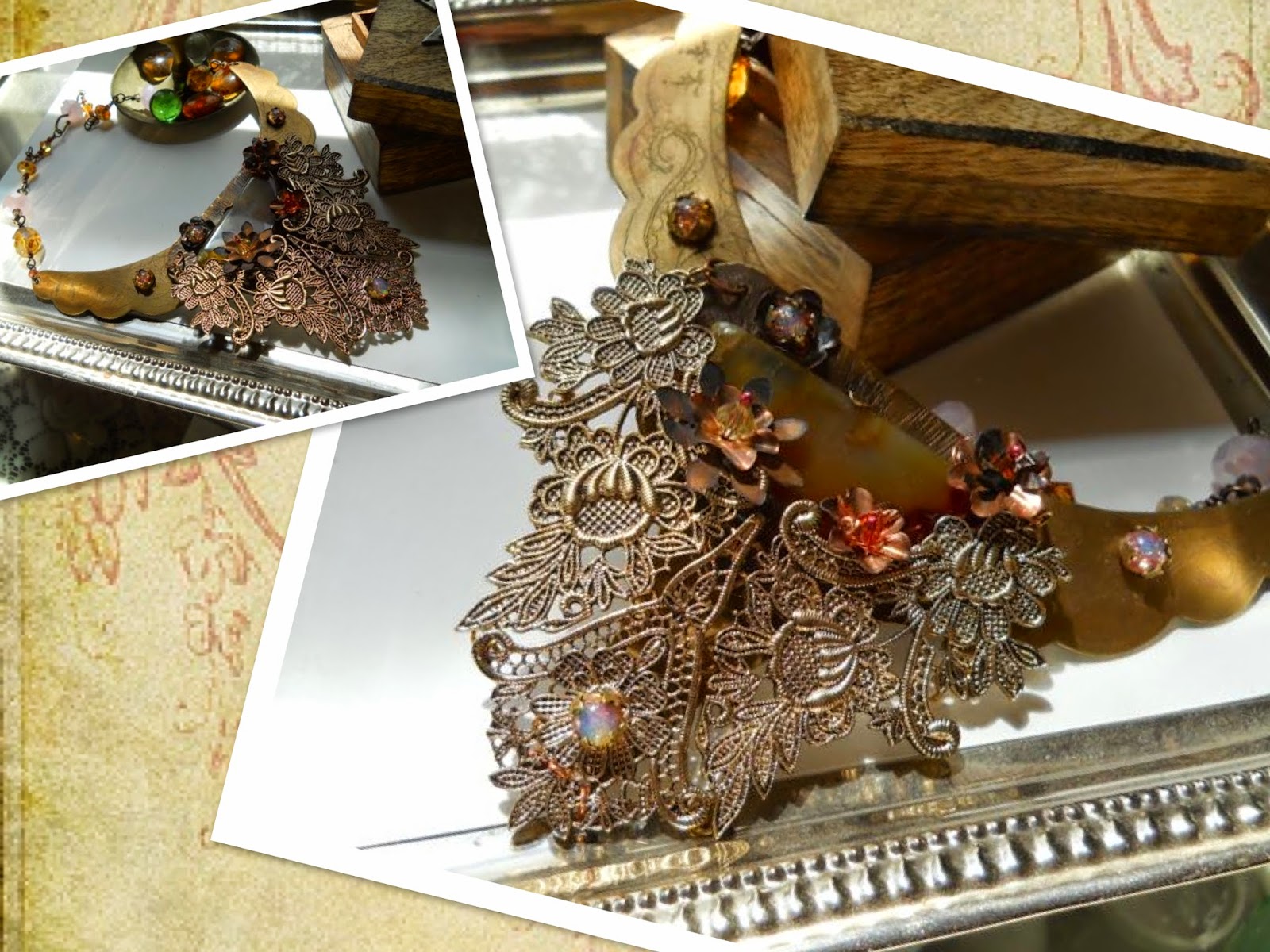 Back to work on the focal I decided I would engrave it instead. Using a dremel and very slow speeds I did something I thought I could not do, I engraved a straight line. Seriously, I once answered a question about engraving with a no you can’t use a dremel, you need special tools……. ahem I stand corrected. ( I think I might really want those special tools now though - engraving is kinda fun!! )

So I engraved not just front but back. Riveted vintage opals and wired the brass lace into place. I added hand made flowers again with crystal centers and a short length of crystal beaded chain.

At this point I thought I was done. I had very little soup left, bullet casings, crystal points, a clasp, pearls and crystals. I so wanted to make one of those cool bullet casing points but the points are 1 mm too big ONE. The hubs says you just need to stretch the casing. LOL That’s all….. the muse leans over and says I have an idea….. 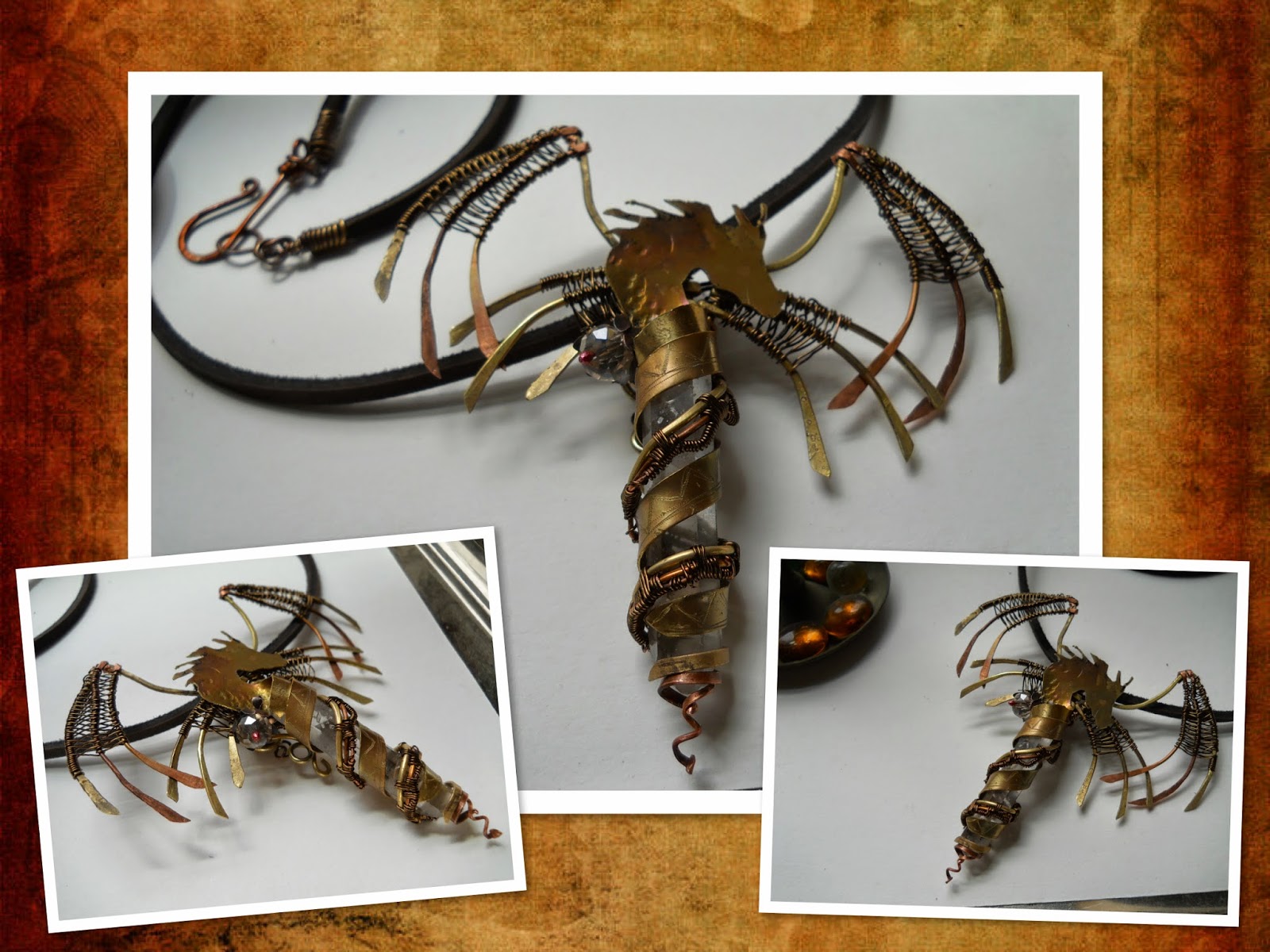 ….. and a dragon was born. The focal piece was my favorite up until this point. Pun not intended! I wrapped the point in a strip of engraved brass, followed by a woven strip reaching up behind into wings. At least it did. I didn’t like the way the one wing was sitting. I thought it was too low. I’m using brass, brass is a fairly hard metal and is brittle when work hardened. I gave a slight bend to the wire, and snap! off came the wing. I had to take the whole thing apart and rework the game plan. This is one of those times when uh oh is truly to your advantage. I made a second pair of wings and sawed a new head added vining swirls to the end of the bale to make the back as interesting as the front and wow! Even my son loves this guy. And look….. the second clasp found its way in too!

At the time of this writing I still have several days until reveal……… I wouldn’t be surprised if another little something found its way into this post as my muse doesn’t think we’re quite finished yet :D

As I was saying with the delay I had several extra days to play! And play I did, I finished up two UFO's you can see that post here (fortunate I did too, as I needed a blog post lol)  AND look at that! Two more pair of earrings found their way into the blog party! 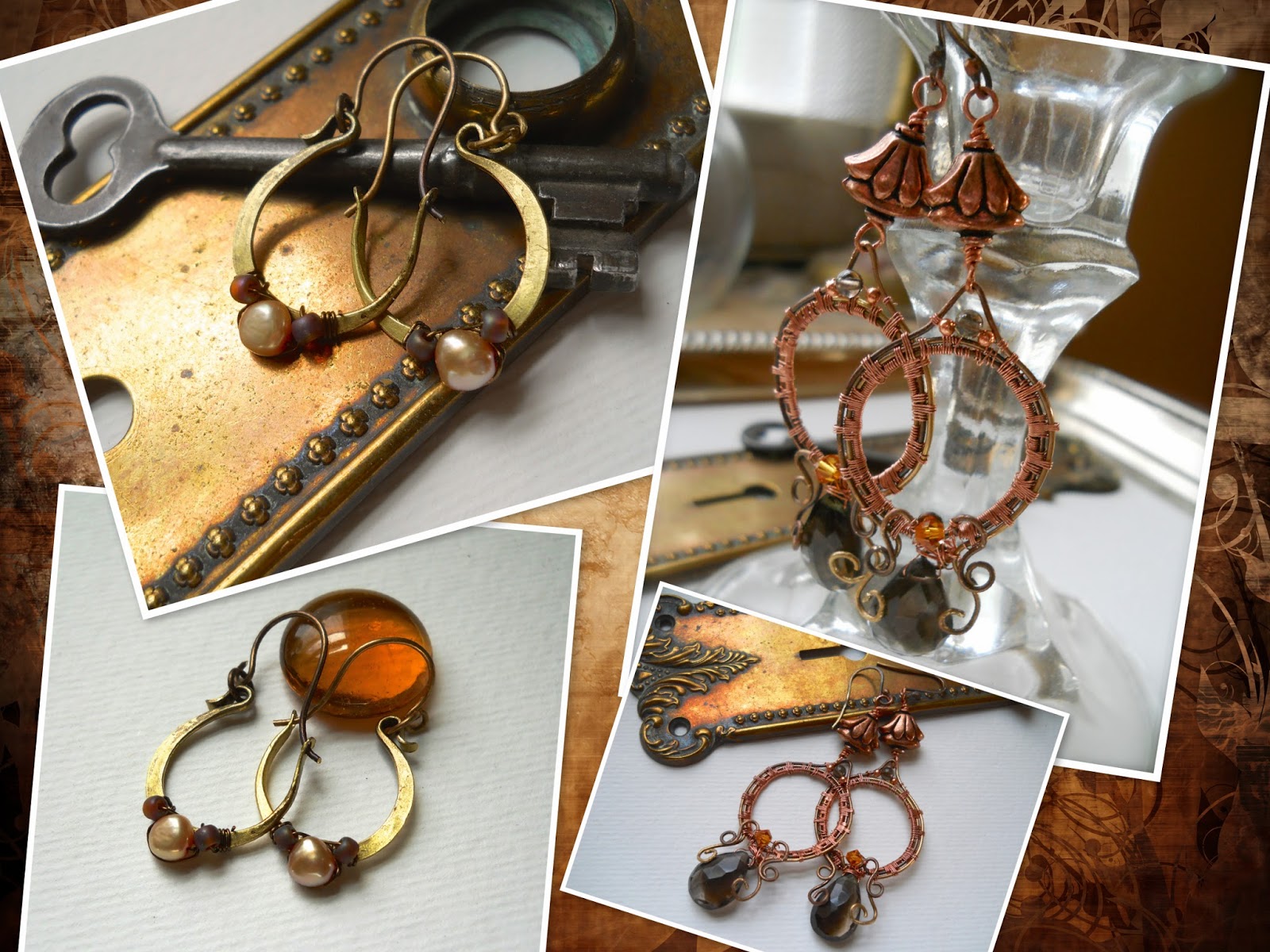 First pair is a simple forged pair of brass hoops wrapped with a peach pearl and the second woven and vined brass and copper with smokey quartz and crystal.

I still have quite a few ideas swimming, seriously inspiring this round, BUT it's only a few hours away until reveal. Yesterday was the hubs birthday and Mother's Day is this weekend. I think I'll play with my muse again in a couple days, right now I think I'll spend some quality time with my family and start hopping bright and early - or after I've had a couple sips of coffee  and can form coherent sentences!  :)

We have close to 500 participants again this year… wow! Make sure to visit Dana’s blog  to see what she made with the goodies I sent her (that’s where I’m headed first!! ) then head back to Lori’s blog Pretty Things    to catch the rest of the hop!

Thanks for stoppin by!


We’ll see ya next time!
Posted by WindDancerStudios at 12:01 AM