Change it up Blog Hop

Wow! I was beginning to think I wasn’t ever going to get this finished! I couldn’t seem to get started, I kept getting interrupted or frustrated so it took days to make and then just as it was all finally starting to fall into place, my camera died. Right after taking a couple of the most gorgeous clear pictures it has taken in a very long time. Well, since it went for a swim in my coffee anyway.

Just in case you aren’t aware, here’s how this hop works. Brenda Sue of B’Sues Boutique has given us a choice of four items to play with.  These cuties:

Our job is to look at them from a different perspective. cut them up or use them in a different manner than you normally would. Keeping the months challenge theme in the B’Sue’s FB group in mind. Septembers challenge btw is Vintage.

I chose the cuff in the bottom right corner.  I don’t normally do cuffs, in fact the only cuff I’ve ever made was for the Build a Line Challenge in the beginning of the year.

First challenge, what the heck am I going to make with it? I’m actually ok with making a cuff with it because, I don’t usually make them so for me that is different but I can't just form it, that isn’t really out the box. I thought to myself, Oh I have a piece of Prehnite that would make a great focal, I’ll use that!

So I cut the filigree in half intending to create a focal with the Prehnite.

Challenge number two…….. the Prehnite is curved both front and back. The cuff would also be curved….. in the opposite direction. No matter how I worked it in my head there was too much air between the stone and the metal. So there I sat, with a cut up piece of filigree, a stone that won’t work and a piece of brass I had intended as a back plate. What to do what to do?

I’ll emboss it! But it needs to be annealed first and now the color is nowhere near as clear and bright as the filigree …….. ha fire for you too!

I’m now quite happy with my decision! Yay me!  I just need to attach everything. Rivets! I drill four holes and I just have four nail head rivets left.
oops dropped one, three left. Where on Earth did that rivet go? It was JUST in my hand! sigh Two rivets left. That isn’t going to work. I still had some balled copper rivets I made for my Dia Los Muertos necklace maybe I can make them work. Grabbed them up, flattened the heads and Tadaaa!! Worked great!

Until I realized I missed on the hole placement and the whole thing was too far over. I cut the rivets off except the one that wouldn’t come off the filigree. That one I had to redrill, through the rivet.

Flatten more rivets and finally we’re done! Woohoo! That’s when I remembered I bought a new packet of rivets from B’Sue when I bought the filigree for the hop…… face palm! I had a brand new pack just sitting there waiting for me all along. 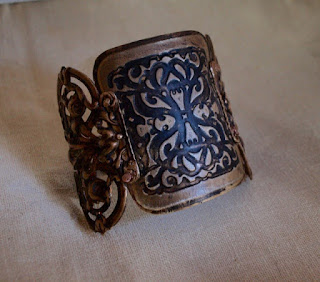 This is my finished piece. I’ve never had one fight me so hard as this one has. Apparently the change it up for me wasn’t so much about the cuff as it was with having to continually come up with plan b, c, d, e, f lol 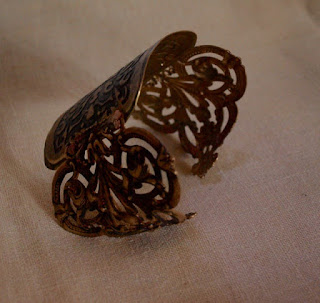 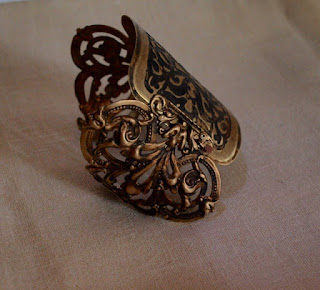 I may play with it some more, add another rivet on either side and maybe a little embellishment but for now I’m happy with it. Both my son and my daughter like it and my hubs gave me the  "You made this?" seal of approval. And hey! I kinda like it too!

Please join me in thanking our Wonderful Hostess Brenda Sue and visiting the rest of the Hop participants.


Thanks so much for stoppin by!
We'll see ya next time!

Posted by WindDancerStudios at 12:02 AM